I) Quick Facts :
II) Etymology of Palau :
The probable origin of "Palau" is from the Palauan word "beluu" which means village which later during Spanish rule became "Los Palaso" to the present day word in English.

Olbiil Era Kelulau is the Palau Senate House . The Hut in the symbol represents the place where the Tribal Chieftain meets the village elders to take important decisions.

VI) Government :
Palau is a Presidential Republic along the lines of the US.It has a Senate consisting of 9 members & the House of Delegates consisting of 16 members representing the 16 states which has a 4 year tenure like the President.Palau National Congress Details. 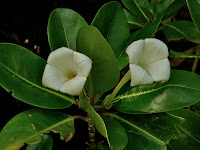 VIII) Customs & immigration Regulations :
Visa - on -Arrival is issued for Indian passport holders for 30 days which is further extendable twice for a period of 30 days each on a payment of $50 for each extension.There is a departure tax of $50.

IX) Getting in/out :
Koror airport is the only commercial international airport in the country that connects with  Japan,South Korea & Taiwan for Indian passengers who can transit through these countries from India.

X)  Accommodation :
Koror is where most of the hotels are situated & is the commercial part of the country.

XI) Cuisine :
There are restaurants that cater to Continental,Japanese,Chinese,Korean & Indian taste buds.

XII) Transportation :
There is no public transport on land & hence all commuting needs to be done by    car/cycle/walk.

Alii (Palauan for Welcome) to my first ever blog !!!

Hi Readers !! I intend to travel to all the existing countries in the world & blog my experience, hence the first destination I selected to travel was Palau . I would be giving an Indian perspective as being an Indian I would be seeing & relating my experience from an Indian point of view.Most Indians wouldn't have even heard of this country & this was amply demonstrated by the Immigration officer at Mumbai airport who asked which country I was heading to for which his reaction to my answer was that does such a country actually exists.

Palau is situated in the Micronesian region of the pacific ocean.It has 16 states out of which 9 states are located in the main Island called Babeldaob followed by Koror state situated in the Island with the same name which is the commercial hub of Palau,the remaining states are islands which are located away from these 2 main islands which are connected by a Japanese friendship bridge. The northernmost point of the Island is around 65 km from the southern end of Koror Island which takes an hour to drive. The country consists of 200 islands of which only 6 are inhabited .Ngerulmud is the capital where the President alone resides which was constructed along the lines of the Senate house & White House in DC with funding from Taiwan. Palau has a heavy influence of Japanese & American work ethics due to its past association. Work hours for offices are generally between 08.00 hrs to 16.00 hrs & timing is always maintained & given importance in commercial interactions which is in sharp contrasts to the Indian way of working.Local cuisine is mainly based on seafood & coconut. Vegetarians like me can just about manage with limited options available.


Palau's economy is based on fishing & tourism. There is a steady stream of tourists from South Korea,Japan,China & Guam for whom it is just a weekend trip to this country akin to Thailand,Malaysia,Singapore,Sri Lanka or Dubai for us Indians.I was the lone Indian tourist to the country during my stay.Palau has a tropical climate with rain & sunshine throughout the year with the temperature hovering around 25 deg.C to 32 deg.C.Restaurants & shops are opened till 21.00 hrs & beyond.There are a few supermarkets in Koror which caters to the needs of the country where most of the available items are imported from countries like China.Since Palau has a total population of less than 20,000 most of the local people are related to each other & hence if there is any festivities or mourning in a family most of the country would be part of it.The only souvenirs that are made in Palau are the storyboards which are made from the ironwood tree while the rest of the souvenirs are imported.


Palau is surrounded by coral reefs which is the first layer of protection for the Island followed by mangroves  on its shores which acts as the second layer of protection.These islands are volcanic outcrops where the surface is uneven & fertile as a result of which you would see a lot of small hillocks & greenery owing to the soil & climatic conditions.It is rich in phosphate & the German channel stands testimony to that which was created by blasting through the corals to get to the phosphate deposits of the islands during German rule.The countries only airport which is connected to world is Koror Airport which is located in Airai state in Babeldaob Island & the countries only harbour terminal is located in Malakal Island.

The contrasts between India & Palau is visible at every level right from the size of the country to the population & beyond.It was a refreshing change to see a land where there is no public transport on land,where even the smallest house has a car to say the least.Palau has motorable roads which are constructed & funded by various countries namely USA,Japan,Taiwan,China&South Korea .The Island has two major highways which run along the east & west coast.I was surprised to find out that the Island has no traffic signals ,pedestrians are given utmost respect by slowing & stopping a good 10m away from where you stand to facilitate crossing the road.Driving is right hand & on the right side of the road.It is a country where crime is hardly prevalent with only 2 prisoners & around 50 cops who were hardly seen on the streets.Palau has no national forces & looks to the US for protection as per its compact free association terms.In Palau death due to negligent driving is national news & a memorial is erected for the victim which so far has been only one a few years back.The labour force comprises mainly of Bangladeshi & Filipino people . Around 21 Indians are said to be residing in Palau who run small business .The Indian diplomatic mission in Philippines is accredited with being in charge of Palau.

Despite the glaring contrasts there are some similarities that exists in the form of chewing beetle nut related products & spiting them in the open.During my stay I got to interact with the local kids who had innumerable doubts about India & it has caught their imagination.I interacted with a few bangladeshi people who were more than happy to see a person from their neighbourhood in this remote distant land.


Anyone from India can plan an extended weekend trip to Palau & back . During the 3 days that I got to stay I went on an Aerial tour of the island which had a panoramic view & was a photographer's delight.I went to see the stone monoliths ,hiking to the Ngardmau waterfall which was like a big shower with the cooling effect of an A/C on a hot day & then went on a day trip by boat to Peleliu to see the historical WW 2 remnants of battle hardware left behind after the bloodiest battle in the pacific theatre which left around 12,000 people dead & visited a few Japanese tunnels where the utensils still remain.

Sulang(Palauan for Thank you) for having the patience to go through my blog.Looking forward to your comments/feedback.

Some of the States of Palau in Babeldaob Island:


If you are interested you could read the other trip related blogs:
1) Transit/Layover Diaries
2) Airline Reviews
3) Airport Chronicles

190cms
CHENNAI, Tamil Nadu, India
You get to live only once so make the most of it by pursuing your interests in spite of the imperfections.Life is not a rat race, it is meant to be enjoyed and experienced at your own pace.Ensure that you leave your imprint before the time's up.